‍Singapore is truly living up to its foodie paradise reputation and wearing its crown of being the second most vegan-friendly city in Asia with pride as more celebrated restaurants join the sustainable eating revolution. With more delicious meat free alternatives within easy reach, it doesn’t matter if you’re vegan, vegetarian, flexitarian or just a food lover in general, we can all agree that more eco-friendly food and vegan restaurant options are always a good thing.

When modern meat alternatives exploded onto the local F&B scene, burgers with plant-based patties led the way and became instant favourites, with stamps of approval from even the strictest burger connoisseurs. Now available widely across restaurants, cafés and fast-food outlets in Singapore, here’s a few that should be at the top of your to-eat list.

Three Buns, dreamed up by the folks behind Potato Head, is a culturally-led, creative space with a restaurant at its core, offering gourmet burgers and crafted cocktails, essentially redefining the burger joint. A fresh addition to their vast range of plant-based burgers, the Three Buns’ The Big Cease comes with a to-die-for buttermilk fried TiNDLE fillet topped with a creamy Caesar sauce in a perfectly toasted bun. The From Russia With Love is also new on the menu, a mouthwatering TiNDLE Kiev Burger. The plant-based burger menu also stocks other brands, such as the Impossible Chedda and Vegan Seagal or the Omni Wan Kenobi and Omni Hustle Gong Bao.

Craving a burger with a bit more kick? Hop over to Love Handle Burgers by 8ASH, who will be debuting a Hot TiNDLE chicken burger, on top of their existing range of vegan burgers like the "Vegan Ramli"(reminiscent of the famous street food burger) and “Fillet-oh-Fishless" (a brilliant play on the fast-food version, minus the fish).

Homegrown bistro The Marmalade Pantry joins the plant-based burger race with its The Impossible Truffle Burger, where juicy plant-based patties are elevated with a truffle aroma. Honouring their roots as a local biz, they also created the Impossible Rendang Meatballs, a savoury, spicy coconut sauce dish that pairs perfectly with white rice. Their Impossible meat series also includes a Marmalade Pie and a Baked Cheesy Pasta.‍

If you still think plant-based cuisines are reserved for Western dishes, then you're much mistaken. Chinese restaurants are embracing sustainable eating, giving traditional meat dishes a vegetarian or vegan twist.

Jade Restaurant at The Fullerton Hotel has a 5-course plant-based menu aptly named “Taste the Future”. The current menu (available until March 31) features Omni Meat in a fragrant Wok Fried Five Grain Fried Rice, enhanced with minced ginger and pine nuts. The kitchen also utilises fresh produce and organic herbs plucked from The Fullerton Hotel's very own Fullerton Farm to showcase the versatility of vegan dishes without compromising on flavour.

All can now enjoy iconic Chinese recipes at Empress, a smart casual Chinese restaurant inside the Asian Civilisations Museum, overlooking the waterfront. Savour familiar dishes with the Impossible Mapo Tofu and Sweet & Sour Omnipork. They will also be introducing TiNDLE into their plant-based menu with an Empress’ Sesame-Crusted Lemon TiNDLE, featuring a TiNDLE fillet coated in sesame seeds and drizzled with a tangy lemon sauce, and a Kung Pao TiNDLE, a vegan reincarnation of the all-time favourite Kung Pao Chicken stir-fried with cashew nuts and dried chilli.

Singaporeans will be familiar with Crystal Jade for its Shanghainese noodles and Xiao Long Bao. The popular restaurant chain has just launched a new standalone plant-based menu rolled out across Hong Kong, Singapore and Guangdong. Named “Crystal Green”, the menu developed in partnership with Hong Kong’s Green Monday will feature fifteen meatless dishes made with OmniPork, Beyond Meat and Heura.

Got some time for dim sum? Mitzo at Grand Park Orchard is partnering with Green Monday to promote plant-based dining. Order a plant-based Steamed Dim Sum Platter, which includes Omni Meat and Vegetables Dumplings, Beyond Meat Sausage Dumplings with Cordyceps Flower and Beyond Meat and Truffle Mushroom Bun. For something more filling, check their meat-alternatives mains like the Vegetarian Flat Rice Noodle with Omni Meat in Truffle Sauce and Fried Udon Noodles with Omni Meat and Black Pepper.‍

Across its ten outlets, restaurant chain Prive will be rolling out the TiNDLE Katsu Curry — a breaded TiNDLE cutlet fried to crispy perfection served with delicious Japanese curry, an apple, edamame and corn salsa, and steamed brown rice. This one-stop, multi-concept restaurant also serves a Heura Chicken Rice for vegan and vegetarian folks to satisfy their cravings for this iconic local dish.

Kinki Restaurant + Bar is a bold and modern Japanese Restaurant based on the urban ethos of being brave enough to change the game. This time, they’re shaking things up further by introducing meat alternatives into their already tradition-defying menus. Partnering with Impossible Foods, Kinki now serves the Impossible™ Omu Rice Burger, Impossible™ Okonomiyaki and the Impossible™ Katsu Sando With Apple Curry.‍

Restaurants specialising in delicacies from other parts of Asia aren't missing out on the plant-based eating movement. The array of rich flavours, aromatic spices and exciting textures will be more than enough to make you forget about the absence of meat.

Rang Mahal is the first Indian restaurant in Singapore to introduce an Impossible Foods Dish — the Impossible Kheema Bao, a take on Mumbai’s signature minced masala lamb with buttered bread dish. Neo-Indian restaurant Adda also offers soulful street-food in the heart of Singapore, led by Michelin star Chef Manjunath Mural. He will be putting a TiNDLE twist on his signature dish — a flaky Butter TiNDLE Pot Pie that promises to satisfy all your senses.

Bite into a crispy and fragrant Peranakan Karana Ngoh Hiangat Candlenut, the world’s first Michelin-starred Peranakan restaurant. The traditional dish has pork swapped out for Karana, a substitute made entirely from young jackfruit, but provides the mouthfeel and flavour as the real deal. For more Peranakan fare, head over to The Peranakan for some Heura 'Ayam' Pongteh, a classic dish cooked with fermented beans sauce (tau cheo), Heura, no MSG and a no gout promise.

Satays are integral to Singapore's food identity, and Violet Oon Singapore Satay Bar & Grill at Clarke Quay is making it more inclusive for our herbivorous friends. Their mouthwatering Impossible Satay is grilled over hot charcoal on order and served with a side of signature ground peanut sauce and fresh pineapple puree, all part of a fully vegan extended menu with 20 dishes, including starters, mains and dessert.

Don’t worry, we haven’t forgotten about Thai food. Tuck into a hearty Heura Red Curry made with Chef Nipaporn’s secret red curry paste and coconut milk, or stimulate your taste buds with a stir-fried OMN! Basil Kapraoat Blue Jasmine. For soups, take your pick from a Quorn Meatball Tom Kha Gai (Tom Yum simmered with coconut milk) or Quorn Meatball Nam Sai (clear Tom Yum simmered with fresh herbs). Dine-in or opt for delivery in one of their convenient bento boxes. Mezza9 at the Grand Hyatt Hotel is also serving up Pad Kra Pao, a Thai stir-fry of chicken or pork with basil and spice, except the meat is swapped out for Heura. ‍

The folks at Lime Restaurant have come up with a mind-blowing “No Meat, No Problem!” vegan a-la-carte menu where diners can pick from plant-based dishes like the Beyond Burger® with melted vegan cheese, the Arrabbiata Pasta with Omnipork Meatballs or a Fishless Fish and Chips that uses Gardien fish fillets as substitute. The expansive menu also includes Asian flavours such as the Wasabi Crab Meat Balls or an Asian style Omnipork Patty with Barbeque Sauce served with rice or fried mantous. Don’t forget to complete your vegan meal with their garden-inspired and Instagram-worthy sweet treats on the dessert menu.

Chef Patrick Heuberger’s trump card, Restaurant ATOUT is a French Bistro, charcuterie, wine bar and private rooms all under one roof. Despite having a passion for the art of cured meats, the restaurant is expanding into meat-alternatives to cater to a broader crowd, serving up a rich and decadent KARANA Rilette with Onion and Balsamic or Tomato and Coconut.

Last but never least, we’ve got pizza on our list. The Veganuary menu may be gone at Pizza Express, but they have added two popular plant-based items to their permanent menu — The Impossible Teriyaki, served with sautéed leek, vegan mozzarella and a drizzle of vegan mayonnaise and topped with spring onions, and the Impossible Teriyaki Spaghetti, which is, well, the pasta version of the same yummy dish. 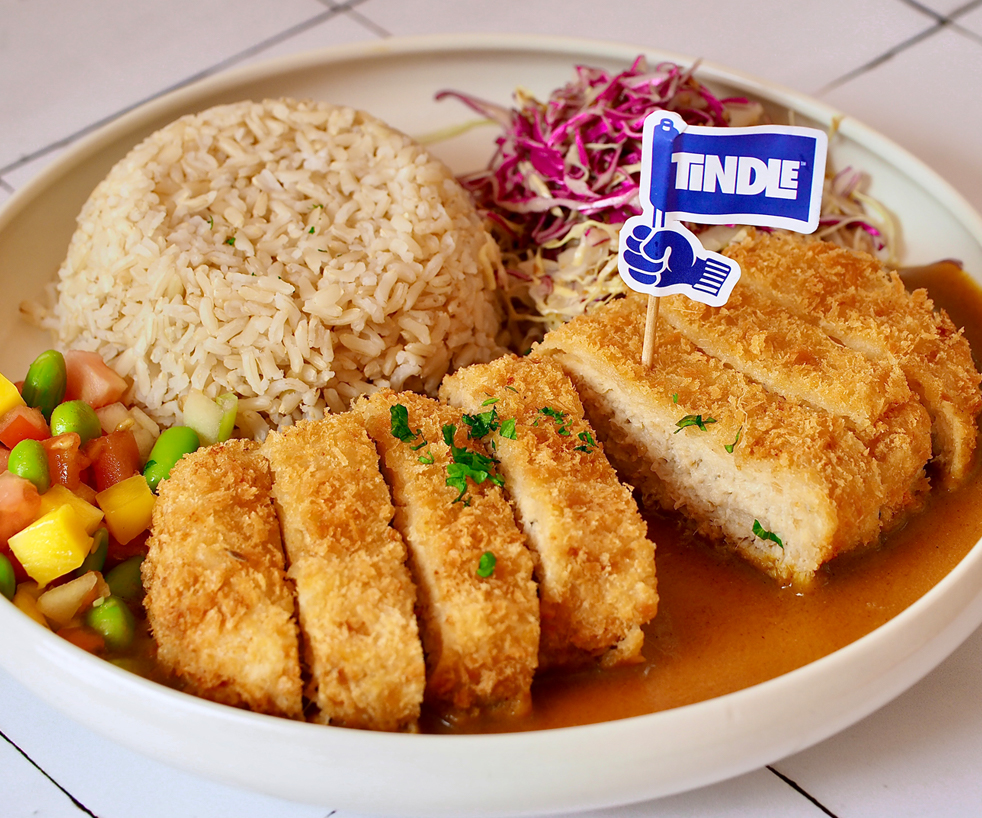